The Cavern Club in its original form was a live music venue situated in the basement of a fruit warehouse at 8-12 Mathew Street, Liverpool, between January 1957 and March 1973.

Notable for the distinctive arched brickwork of its construction, the Cavern Club had served as an air raid shelter during World War II.

The club’s founder, Dr. Alan Sytner, took inspiration from a district of Paris that was notable for its jazz clubs, particularly a venue called Le Caveau de la Huchette. Influenced by this, Sytner’s music venue started life as a jazz club, however it gradually became a significant venue for Liverpool’s burgeoning beat music scene in the early 1960s. It had played  host to a number of skiffle bands before then, a style of music Sytner tolerated, although he was very much against rock and roll. Skiffle was a genre of music that had been taking Liverpool by storm at the time.

One of the first skiffle acts to perform at The Cavern, in August 1957, was The Quarrymen, a project formed by John Lennon in 1956. By 1958, Lennon had recruited both Paul McCartney and George Harrison to his band, and it had begun to change direction toward rock and roll. By March 1960, it had changed names to the Beatles. Ringo Starr later joined the band in 1962, replacing Pete Best.

In the meantime, Sytner had sold the club in 1959 to Ray McFall (1926-2015), who unlike his predecessor was not opposed to rock ‘n’ roll sounds; and by the start of 1961, McFall had employed a manager and master of ceremonies called Bob Wooler to book bands there. Wooler was happy to invite beat bands and blues acts, paving the way for the Beatles in their new guise to be allowed to perform there for the first time in February 1961, in what would prove to be the first of 292 appearances for them at the club over the space of just 30 months, the last occurring in August 1963, by which time their fame was such that the venue was no longer suitable. 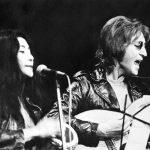 The popularity of beat music was promoted in Liverpool in the early 1960s by Bill Harry, a classmate of John Lennon during his time studying at Liverpool Art College. In 1961, Harry founded a newspaper called Mersey Beat, which was regularly published for the next three years, and helped to promote not only the Beatles but also other local bands, of which there were hundreds at the time.

The success of this publication helped the Merseyside area’s beat music style to become known nationally as Merseybeat after its name. One local band, The Pacifics, was even renamed the Mersey Beats in February 1962 at Wooler’s initiative, but the term Merseybeat was used collectively about all local bands playing in variations on this style, with the more famous examples including Gerry & the Pacemakers, the Searchers, the Swinging Blue Jeans, and Billy J. Kramer and the Dakotas; and others that enjoyed lesser chart hits including The Fourmost. Some successful beat bands from nearby Manchester such as the Hollies also adopted a similar sound and were invited to play at the Cavern Club, becoming associated with the Merseybeat scene despite not hailing from Liverpool themselves.

Other famous musical artists to appear at The Cavern Club in the Beatles’ wake included The Yardbirds, The Kinks, The Rolling Stones, The Who, Queen and Black Sabbath. A young Cilla Black is said to have worked there in a menial reception role before launching her own musical career. It was a place where stars were born, which is evident from its impressive roster of performers.

The Cavern Club abruptly ceased operating at its original site in 1973 when it was forced to shut down by a compulsory purchase order on behalf of British Rail, which had plans to use it for ventilation shafts for a proposed urban underground railway.

Soon after the forced closure of the original Cavern Club in 1973, a new club initially styled with the same name opened at nearby 7 Mathew Street. However, it changed names to the Revolution Club and did not last to the end of the 1970s, having been replaced by 1979 by another venue called Erics operating at the same site.

Although the planned underground line at the original site of the Cavern Club was never opened, preparatory works had damaged the basement of the building beyond repair, and an attempt to renovate it and reopen the Cavern in its original setting in the early 1980s was foiled by the discovery of extensive structural damage to the club’s iconic arches. Instead, the remains of the arches were demolished, with bricks from them being salvaged and sold off to collectors. A completely new building was then constructed on the same site, but it included a reborn Cavern Club that featured design elements closely modelled on the demolished original basement.

This third iteration of the Cavern Club opened in 1984, and lasted five years before closing in 1989, but it reopened on the same site under new management in 1991 and has been in operation ever since. The legend and prestige of the venue remains today both with locals and further afield.