The Arts Lab, also known as the Drury Lane Arts Lab, was a venue for alternative arts exhibitions and performances situated at 182 Drury Lane, London. Founded by American theatre producer Jim Haynes (1933-2021), who was its chief custodian-in-residence, it operated for only a couple of years from 1967 until the Autumn of 1969 before closing down. Its closure occurred soon after it was reported that it had fallen into rental arrears and that the landlord had begun to threaten it with eviction.

The facilities were extensive, including a gallery space, a cinema, a theatre, and initially also a film workshop. Several of these areas had their own dedicated directors.

The cinema, overseen by David Curtis, was noted for running films all through the night, and passing visitors would sometimes sleep there to save money on hotel facilities.

A printed newsletter was produced in connection with the Arts Lab from 1968, initially by British social reformer Nicholas Albery (1948-2001).

Among the famous artists and performers whose work appeared at the Arts Lab were David Bowie, John Lennon, Yoko Ono, and the American filmmaker Wheeler Winston Dixon (born 1950), who was just eighteen when he spent the summer there in 1968.

Following the closure of the Arts Lab, a London New Arts Laboratory (also known as the Institute for Research in Art & Technology, the New London Arts Lab, or just the New Arts Lab) was formed by some of its founding members together with new associates. This was situated at 1, Robert Street, London, from 1969 to 1971.

Around the UK, dozens of other approximate copies or derivatives were spawned. The following are among those documented as having come into being or as being in the advanced stages of planning by October 1969 or soon afterwards[1]:

Haynes personally also founded the Arts Labs in Great Britain Trust in June 1969, under the auspices of the Community Development Trust, itself a registered charity.

It is documented that there was a convention of arts labs held on July 27th, 1969, at which they were organised along regional lines into eight groups: 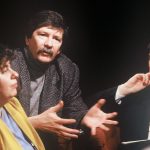